Here’s my take on reviewing southern caramel cake recipes. Both the entry and the recipe are done in the editorial voice of Cook’s Illustrated. It is a long read in comparison to other posts, but it takes a while to go through each cake component. Please bear with me! 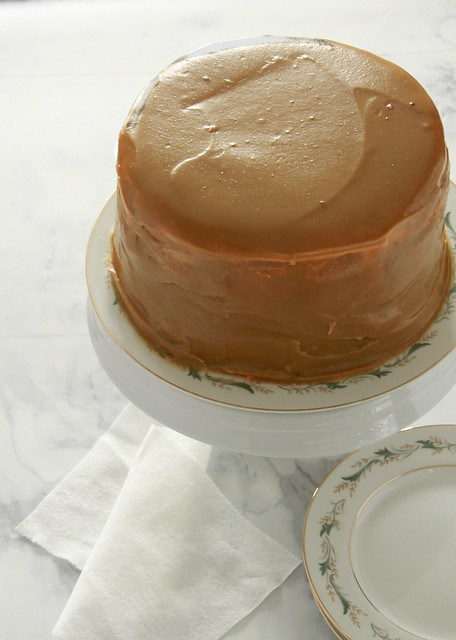 A Caramel cake is the Jaguar of the cake world. Finicky, fussy, and always on the cusp of ruin. Similar to a Jaguar car—flawed with some mechanical problem— a caramel cake, turns out to be a lemon. An overly sweet and dried out mistake of a lemon. Something is wrong with the cake, or the frosting, or both. When done properly, caramel cake’s flavors and textures are as smooth and sumptuous as velvet. A good caramel cake is like a well oiled machine, running cohesively with balanced textures and consistencies.

Caramel cake is rooted in European origins. Among the Old World traditions that crossed the Atlantic was the Doberge torte, a multi-layered of cake and frosting. While this torte can still be found in New Orleans, Southern bakers didn’t reserve stacking to the Doberge cake alone. Lavish layering was applied to a slue of single layered cakes. By the turn of the 20th century, the 19th century single story caramel cake transformed into the present day sky-high tower of creamy and buttery goodness.

With its long history, was there already a perfect caramel cake recipe out there functioning properly? After gathering up several recipes, I baked up the 5 most promising contenders, a mix heritage and modern cake recipes.

They were edible, but far from memorable. Despite the varying preparations of the cakes, the end results were nearly identical: flavorless sweet cakes killed by an even sweeter rock hard glaze. At first bite, the caramel cakes tasted of pure sugar. More like a candy than a slice of cake, tasters got nauseous after one or two forkfuls. 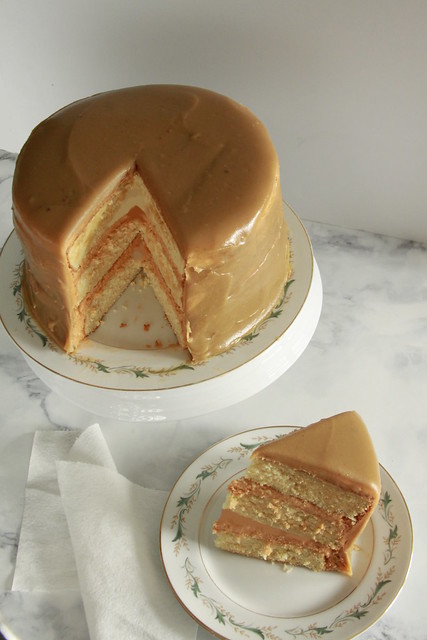 After binning several cakes, I finalized my goal. The moist buttery cake had to be tender and couldn’t compete with the sugary caramel frosting. The poured frosting shouldn’t be hard to the bite nor should it be sickly sweet. This cake needed an overhaul repair, all of its components needed fixing. I first would tackle the yellow cake and then I’d work on the caramel frosting. 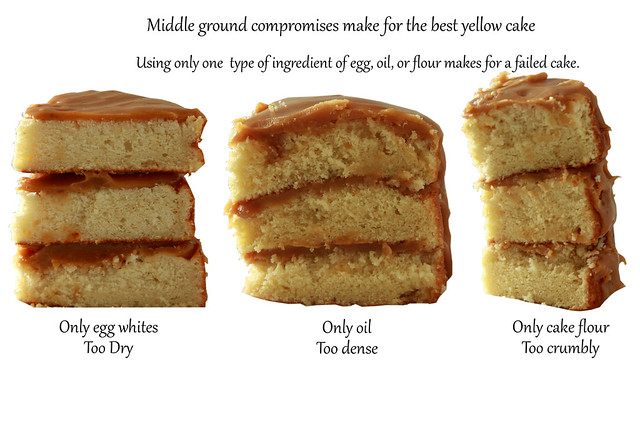 Caramel cake comes with various preparation methods. Regardless of the wide array, I learned that the cakes themselves fell into two styles: heavy and leaden or crumbly and fluffy—both of which were decimated under the weight of the caramel frosting. These yellow cakes were also severely parched. The most common preparation method for yellow cakes—the egg separating method—produced the least favorable cake. Light with a dry cottony texture, this version was a poor partner to the heavy caramel frosting. The two step method yielded squat pancake flat layers that didn’t rise high. Sponge cake and angel food methods didn’t align with the ingredient list. I was left with the standard creaming method of aerating the fats and sugar to create air pockets, adding the eggs, and alternating between wet and dry.

In terms of flours, recipes were all over the board. Most used cake flour, some used soft wheat White Lily, and a scarce few used all-purpose. As the cake flour based cakes crumbled with assembly and stacking, I was less and less convinced of its use in a caramel cake. Though delicate and fluffy, cake flour’s low protein content didn’t provide enough glutenin or gliadin for gluten formation. The lack of structure couldn’t hold up to the frosting, let alone accommodate the moisture from the fats, eggs, and other liquids in the batter. I found that all-purpose flour yielded the best structure and could stand its ground against the frosting.

I started to re-hydrate the batter. Using just oil produced a dense cake that was too heavy, but relying solely butter didn’t help with the moisture either. The solution turned out to be a compromise of both: 8 ounces of butter provided the color, structure, and height, and 6 ounces of oil to provided the moisture.

Testings revealed that the spectrum of texture and color came from the ratios of eggs used. I was quick to scrap egg white only recipes, for they produced a dry and rubbery cakes. After all, this was a yellow cake, I needed to use both eggs and egg yolks, but how much? Needing to go for both structure, moisture, and color I found that 4 eggs wouldn’t cut it. Tasters noted that 4 egg cakes made pretty unremarkable texture and lacked the yellow coloring. Essentially 4 eggs was passable, but oceans apart from the yellow cake’s quintessential moist and velvety characteristics. I increased the egg amount to 5, then 6. At 6 eggs, the cake had more moisture but it didn’t have the colored hue that was so indicative of yellow cakes. I tried 4 eggs with 2 egg yolks, and then I lost the moisture. I tried the reverse, 6 eggs plus 2 egg yolks, and that yielded the creamy yellow color I was after.

This cake needed to have flavor. Initial recipes called for a scant 1 to 2 teaspoons of vanilla extract which—when dispersed among three layers of cake—wasn’t even detectable to the tongue. Too much extract vanilla is never a bad thing, but I didn’t want to use a whole bottle. The problem lay in baking. When raw, the cake batter was perfumed with vanilla. Once the cake baked, the vanilla flavor vanished. At temperatures of 173 degrees or higher, the alcohol in vanilla extract evaporates, taking some of the flavor compounds with it. The 1 tablespoon I had been putting in wasn’t even making a dent taste-wise. I wanted to have a stronger hit of vanilla flavor. I added vanilla extract, teaspoon at a time, and found that 2 tablespoons was right amount to discernibly taste the vanilla in the finished baked cake.

Finally this Southern Caramel Cake needed dairy. Normal milk was eliminated because it contributed little flavor and yielded the least amount of moisture. I tried making the recipes with both buttermilk and sour cream. Buttermilk-based cakes had moisture and tanginess, but sour cream-based cakes proved to be better. When baked, sour cream’s cultured acidity shined bolder, further cutting through the sweetness of the caramel cake’s frosting. Again, balancing the fine scale of moisture and denseness, I knew I couldn’t use only sour cream. To prevent the batter from being too thick, ¾ cup of sour cream was loosened with a ¼ cup of buttermilk. 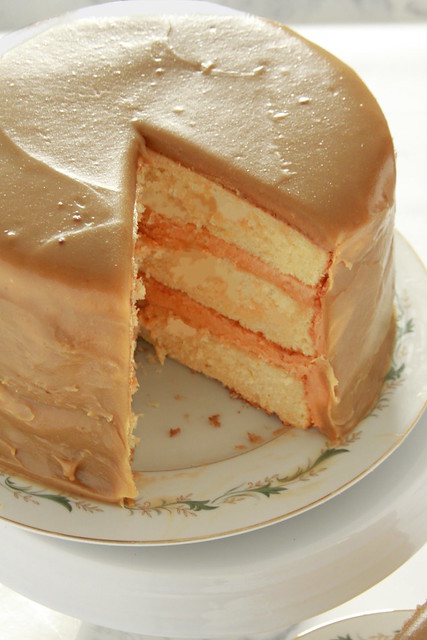 Before the age of confectioner’s sugar, boiling granulated sugar on the stove top was the only way to get a smooth icing consistency. Traditionally, the Southern Caramel Cake frosting would be cooked low and slow in a cast iron skillet until—as many recipes stated—a just right deep caramel color developed. “Just right” was too vague for me. Recipes called for sugar (granulated or brown), milk, butter, and salt cooked to the soft ball stage (occurring from 235 to 245 degrees F) and beaten to cool down.

Some caramel frostings took 15 to 20 minutes while others took 1 to 2 hours. Cooking up the many versions of caramel frosting, I identified two main problems with Southern Caramel cake frostings: the caramel was too hard and it was void of deep flavor.

As I learned, cutting out the time compromised the texture and taste of the caramel. The longer time made all of the difference. The low and slow 1 ½ hour to 2 hour simmer produced a deep creamy caramel frosting that stayed soft even after it had cooled down. Beating the frosting proved to be unnecessary nor did it increase the cooling time. Putting the caramel frosting in a ceramic bowl and occasionally stirring it with a spoon resulted the same sort of texture, without having to haul out a stand mixer.

Wanting to turn over every stone, I tried both types of dairies for the Southern Caramel Cake frosting: fresh cream versus evaporated milk. I assumed that fresh dairy would make for a creamier tasting frosting, but the evaporated milk won out. Evaporated milk has 60% of water extracted, producing a highly concentrated creaminess. Two teaspoons of vanilla extract livened the caramel frosting with much needed floral notes. But tasters wanted contrast. Salt was the perfect counterpoint. A single teaspoon toned down the sweetness and brought out the more subtle nutty flavors of the caramel.

To make the perfect Southern caramel cake, I played the balancing act to curtail the frequent shortcomings: too rich, too sweet, and too heavy. After many turbulent trials, I finally got a luscious velvety vanilla cake with toothy bite that contrasted the soft textured, deep flavored caramel. Playing an appetizing pairing of sweet and slightly salty, the Southern caramel cake was finally out of the repair shop. 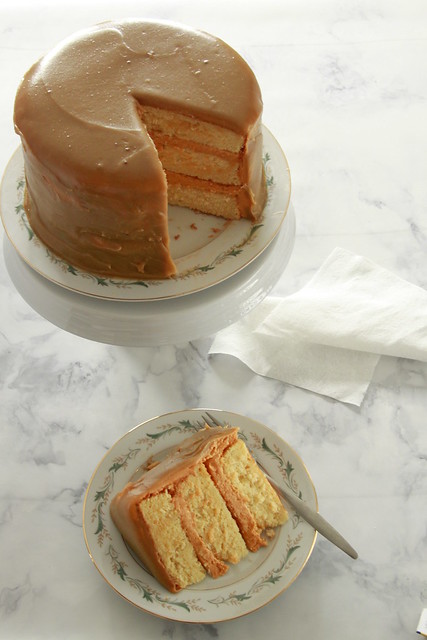